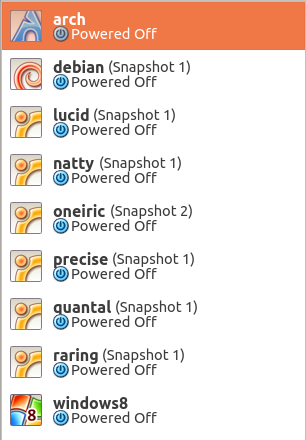 Thought I’d share the setup I have for virtual machines, how I use them to triage bugs and experiment with various software.

First a small digression, since the observant reader will notice I am using Virtualbox. When I first discovered and started playing around with virtual machines I had a computer incapable of hardware supported virtualization. I discovered this rather quickly since every virtualization solution I tried failed to work because they all required specific CPU features. After testing several solutions, I settled on Virtualbox because it also supported software-based virtualization. I’ve later replaced that machine, and while my current computer supports hardware assisted virtualization I’m still using Virtualbox as it is straight-forward and I am familiar with it. I did briefly try a couple of other solutions when I got my new computer, but didn’t find any obvious advantages they had over sticking with my existing setup.

Now, the machines. I have a set of the currently supported Ubuntu releases, organized by their code names. (Yes, I’m aware 11.04 reached end of life a while back.) They come in handy when confirming bugs or trying to track down which release something broke (or got fixed). My main use case is: load up the relevant release a bug was reported against, verify it is reproducible there, and then check whether it is also present in the latest development release.

All are kept more or less up to date, to make sure I have the latest version of libraries and other software when attempting to reproduce bugs. When I started triaging bug reports I used to simply install the software on my main system and check if the bug was reproducible there, though I quickly changed my approach for several reasons. Mainly because my main system wouldn’t easily allow me to test with multiple releases, but also in case my setup or set of installed packages would produce a different result than a system out of the box. The latter may not always be relevant, but there are some cases where it matters. For instance, say a program fails to run without a specific library which is not installed as a dependency, however since I already have installed the library for other reasons I wouldn’t be able to reproduce the issue. In cases like that it makes more sense to check what happens on a system out of the box.

In addition to the Ubuntu releases, I also run a couple of other systems. Arch Linux is nice and since it is rolling release distribution it usually includes the latest version of programs/libraries before most other distros. It’s ideal for testing whether projects still work as expected with the latest version of their dependencies, or to try out features in newer versions of programs. If newer versions of a library or compiler is released, it’s really convinient to be able to catch any issues early before it ends up the stable version of other distributions. In addition, Arch has a rather different philosophy and approach compared to Ubuntu, which is interesting to explore.

The Debian machine is running Sid (unstable). For most of the same reason as Arch, being able to test the latest version of projects, plus it will eventually turn into the next releases of Debian, Ubuntu (and related derivatives). As Ubuntu is based on Debian, it is of course also relevant for checking whether bugs are reproducible both places in case they should be forwarded upstream. As Debian is currently in freeze for the upcoming Wheezy release, there’s not many updates these days though.

Oh, and there’s a Windows 8 preview I was trying out when it became available. Used it some when it was announced. I’m pretty sure that will expire soon.

While it may sound complicated, compiling your own Linux kernel is actually pretty easy. All you need to do is follow the proper instructions like this. Actually, if you’ve managed to set up an Arch box, compiling the kernel should be no problem.

Basically you download the latest kernel, unpack it, configure it (using some really nice menu with all options available), compile it and change a few lines so that grub (or your favorite bootloader) is able to find it. Apart from some initial problems where I had forgotten to copy over some new files, it was pretty straight-forward. I was really happy seeing the computer go from selecting my newly compiled kernel at boot-up, to booting without errors and presenting me with a login prompt at the end. All in all it was a fun thing to do, not as hard as I expected, and I may have earned some geek cred in the process.

I’m still amazed at how easy it was compared to what I expected. Especially I was surprised that it was way easier than compiling Firefox, which I struggled with for quite a while before I got something that didn’t fail to build.